I love to show people around Lyon on a free tour, it's an amazing city with a lot of hidden things to discover!

I have more than 800 5 star ratings on TripAdvisor for a 5/5 rating. People like you love the tours!

One of the amazing things about Lyon is how much is hidden from plain view. Come discover the many Traboules and hidden courtyards on my tours!

Hi, my name is Paul!

I have been a tour guide for many years and I just love the city of Lyon. It is such a nice place to live and I get to tell people everyday what I love about it. On my free tours, I love to talk about what makes Lyon special, it's history and culture.

There is so much to talk about!

Lyon has many nicknames. It was the Capital of Gaul during Roman times. People still call it La Capitale de La Résistance. And of course, it's La Capitale de la Gastronomie. So I have so much to talk about: the Bouchons, Paul Bocuse, Emperor Claudius, the Traboules, Klaus Barbie and the Résistance, Silk, Jacquard and so much more!

My Tours are Free to Book!

Book now for free, and after, if you liked the tour, you could leave a tip to thank me! I enjoy answering all the questions you might have, before, during or after the tour. Email me, call me or send me a message and I'm happy to help in any way I can.

What people are saying about Free Tour Lyon... 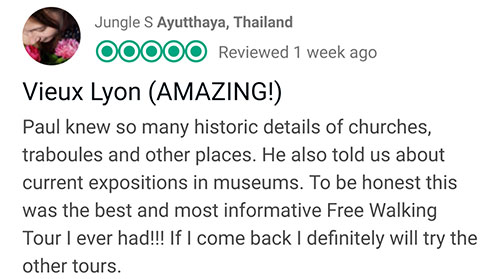 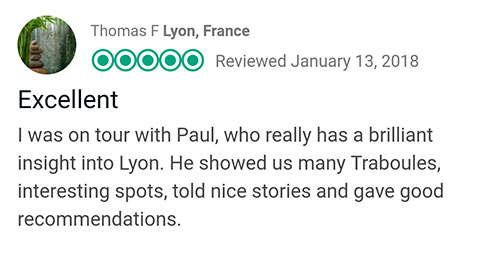 Free Tour Lyon has an excellent rating on TripAdvisor. Check for yourself by clicking on the TripAdvisor logo! But make sure to book (for free) on freetourlyon.com, TripAdvisor asks money to book through them.

I do different tours on different days. They are both great introductions to (vieux) Lyon, but cover different areas

Reserve your Free Walking Tour of Lyon now, click on Book Now below

My Free Tours of Lyon sell out fast sometimes, so better reserve your spot now! I'll send you a confirmation and also an email with all my tips for things to do in Lyon, where to eat and practical information.

You can also just show up, but check the schedule to see if the tour is sold out or closed.

COVID19 NOTICE: During the pandemic, I will operate with much smaller groups and we will keep 1.5m between people. I will have handgel with me and masks if you want one.

It's free to book, so what are you waiting for? 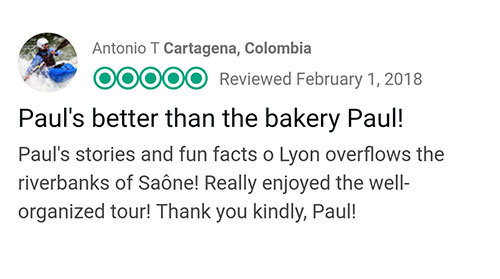 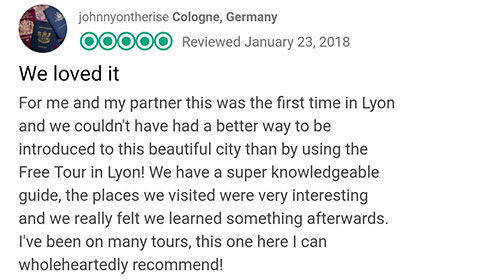 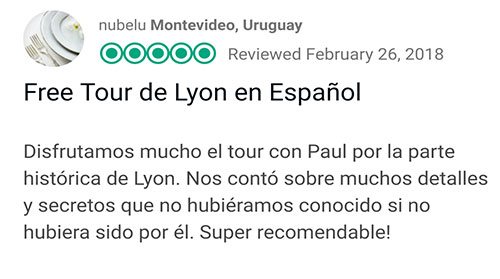 
I work for tips. Booking is free through my website. If you liked my free tour of Lyon, you can, if you like, leave me a tip afterwards. This way, I have to provide a great tour every time to get paid! Average tips have ranged normally between 5 and 10 euros per person. I am happy with anything you will give me and understand that not everybody has the same amount of money.
I developed 2 walking tours of Lyon that I guide on different days. Both tours are great introductions to Lyon, but have different itineraries. There is so much to see in Lyon, that I decided to divide the (UNESCO heritage site that is the) city center up into 2 different tours. I also prefer not to do the same tour every day. You can join both free tours if you want, but if you just join one, you will get a good introduction to Lyon.
I do two tours on different days. Both my walking tours of Lyon start at 10:00, but on different places. The Vieux Lyon tour starts on Place St. Jean on Mondays, Wednesdays, Thursdays and Saturdays. The City Tour of Lyon starts on Place des Terreaux on Tuesdays, Fridays and Sundays. Click here to see pictures of the exact meeting points.
My Tours last 2 hours. Sometimes I go a bit over time, if people have a lot of questions or walk a bit slower, but never more than 15 minutes. I think 2 hours is perfect for a free walking tour in Lyon.
My Free Tour of Vieux Lyon ends in the Hôtel Dieu, around Place de l'Hôpital and the Free City Tour ends on the Place du Gouvernement in Vieux Lyon.
Yes, I do Private Tours of Lyon, but only in the afternoon. In the morning, I am busy with the Free Walking Tours of Lyon. You can book my private tours in the Booking Section. I don't work weekend afternoons though. Click here to find out more about the private tours.
Sure! You can follow me personally on Instagram if you want a few pictures of Lyon every now and then. I am also on Facebook, and you can like my page by clicking on the link.
During the pandemic, I will operate with much smaller groups. We will keep 1.5m distance between people. I will have handgel and masks available. The tourist office of Lyon has decided that some private passageways and courtyards will remain closed.